After a long day at Yale-New Haven Hospital, the results are in and Ashley and I have decided to share today’s news in a joint post…

It always seems like we are waiting – in line at the grocery store, for a much-needed vacation, for work to be over.

What bothers me most about this premise is the precious time we squander while we impatiently yearn for the cashier to just hurry up.  All that time in between rushing from here to there or waiting for something you are looking forward to may feel mundane, but it’s our time.  Chris and I learned at a very early age that time, mundane or not, should not be wasted.  In any event, it seems to me that often times the built up anticipation while we await “the next big thing” is better than what we were waiting for in the first place.  So why do we wish our lives away?

My favorite religious concept is the Buddhist idea of mindfulness. Essentially, it teaches that as people, we should strive to enter a mental state of present consciousness – to be aware of what is going on around you at that moment and to be at peace with it.   Let go of the past and don’t worry about the future – and when you reach this state of mindfulness, you will be happy.  This notion makes perfect sense, but I am admittedly one of its worst violators.

Today was a huge day for Chris.  As he earlier alluded to, a small regrowth of his tumor led to a gamma knife radiation procedure, which the doctors hoped would prevent any further growth and eliminate the need for surgery.  Today was his 3-month MRI follow-up, which would determine whether or not the gamma knife surgery was a success.

I’ve become accustomed to waiting in the hospital now.  It’s a perfect example of mundane time that I wish away – worrying about the results and just wishing to get out of there as soon as possible.  Today, while Chris underwent his MRI, I sat around and was a complete nervous wreck.  Besides the fact that I was trying to prevent a full blown anxiety attack from the loud noises emanating from the MRI machine, I was consumed with worry about the test’s results.  I knew that regardless of the outcome, we were equipped to handle it as we have in the past – but the thought of this not working and continuing to battle regrowth was just a terrible thought I was having trouble shaking.

But after all of those negative thoughts, a positive one finally emerged.  What if it did work?  This truly could be the end – well, it will never be the end because we will monitor this the rest of our lives, but as far as the initial tumor and procedures, this could be it.  I smiled.  I decided for the rest of my time waiting for the MRI to be over and for the results appointment thereafter, I would consume myself with the positive thought that there was a possibility that his tumor is at bay, not that the procedure didn’t work. In that moment, I understood mindfulness and how it can amazingly affect your experiences.  I didn’t want to let the present go, because my present thoughts meant there was hope.  For the first time ever, I embraced waiting.

And now I hand the reins over to Chris, because I think it’s his place to share the news with you…

As I stepped onto the elevator and headed up to the eighth floor where I would learn the results, mixed emotions ran through my mind.  While I was always confident today would bring nothing but good news, I had my doubts.  Let’s face it, we all have doubts.

But today, I just knew.  After taking my temperature, blood pressure and weight (oh yea, and the nurse also asked to see my ID bracelet just be sure I was who I claimed I was for the umpteenth time today), I was brought into yet another waiting room where Dr. P would walk through the door on the adjacent wall any second.

Not a minute later than the nurse walked out, the door re-opened…

A thumbs-up and a big smile.  “We got it!” he said!  My surgeon was genuinely excited and began telling me how well everything looked on the scans.  He eagerly brought me over to the computer where I saw the MRI comparison from December to today.  To my great relief, I saw but a small remnant of what the regrowth had been late last year.  Looking at the two scans, side-by-side, I could not help but to simply smile.  Although I will have to be monitored for the rest of my life, it was the first time, in five long years, that I feel like this road through hell has met its demise.

As the news was broke, I reflected back on the road I traveled to get to this point and the travesty that was brought into my life – the ups and downs, the laughter and sorrow.   And while I am realistic and recognize that this will be “my” battle for the rest of my life, I could not have asked for anything more than having such a fantastic medical team who truly has my best interests at heart.  But what is more, I have the best and most supportive family and friends a 30-year old can ask for. 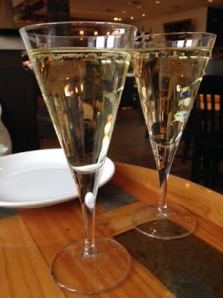