Growing up, I always heard the saying “laughter is the best medicine” but thought to myself, “nah, that is just a saying.”   Or is it? This past Tuesday, the CT Brain Tumor Alliance proved that it’s one hundred percent true.  The CTBTA’s annual “Laughter on the Brain” was held at Infinity Hall in Hartford.  The goal of the event was simple – to raise awareness, money and support for brain tumor patients and quite simply – for everyone to have some fun.  That goal was met instantly.

With a great vibe from Broca’s Area to kick off the night, followed by the opening remarks, a few words from yours 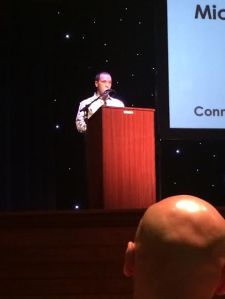 truly, and an awesome live auction, the night was off to a great start.  But on my mind, and I would venture to guess almost everyone else’s in the room, was the topic of brain tumors and brain cancer.  It is hard not to think about the devastation that can occur from the diagnosis, but the CT Brain Tumor Alliance did another wonderful job in making the best of a dark situation.  Once the comedians took the stage, all was forgotten – at least for the time they took the stage.

The comedians featured included Eric Tartagilione, Dr. Jay Sutay and Kevin Lee.  Maybe it’s my new-found obsession with the medical profession and doctors, but my favorite of the night was Dr. Sutay.  Donning a Scooby Doo tie, this guy was absolutely hysterical.  As if it wasn’t funny enough that he is legitimately a practicing doctor by day, but his jokes were absolutely phenomenal.  He had people in stitches!  Get it?!?

Instinctively, this made a light bulb go off – wouldn’t it be great for hospitals to set up comedy shows for patients?  It does not have to be a professional comedian or anything elaborate, but simply, a way to make patients and caregivers laugh. Hey, there’s even some science behind it.  I think back to the day during my recovery when I went to see Tropic Thunder with my sister and brother-in-law in the theaters.  Despite having little ability to verbally communicate, I screamed with laughter, which in turn gave the two of them a good laugh and some comfort that I was still in there.  The movie was so bad that it was hysterical to me (or as my wife tells me, I have a terrible sense of humor), but whatever it was – it was exactly what I needed – a laugh to make me feel human again.

In talking to current patients in treatment after the event, they shared in the feeling that it was joyous, fun and festive occasion. Hopefully, they too were able to forget about their current situation for a little while.  In particular, I must tell you about Aisha. I recently met Aisha, who not only grew up in the same town that I did, but also the only other person I have met with a central neurocytoma (a troubling coincidence). Our stories are very similar, as our outlooks.  However, I don’t think I’ve ever met a person with such a sunny disposition while facing a trauma like this.  Not only is she full of positivity, but she is by far one of the funniest people I’ve ever met and is quick to make a joke about her situation.  She’s simply fantastic.

I think a good laugh and not taking yourself so seriously does almost every patient well.  We all need some relief and a way to take our minds off of an unfortunate situation that we may be facing.

In a perfect world, there would be no charge, no pill to swallow, nor poke of a needle.  Rather, everyone would be welcome to attend a comedy show, share some laughs and forget about the pain and suffering for a while.  After all, laughter truly is the best medicine.

2 thoughts on “Live For Tomorrow, Be Happy Today, Laugh All Your Sorrows Away”