When I went out to Rhode Island to begin law school five years ago, I was alone and determined to begin my quest to achieve my dream and make new friends.  But little did I know that I would spend most of my off-time with my best friend and the girl I would wind up marrying.

Ashley, my amazingly supportive wife, wrote this next entry.   But for law school, there is no chance we ever would have met each other as we lived two-and-a-half hours apart.  But as destiny would have it, we lived on the same street during our 1L year and were in the same section for classes that year.   I can go on and on, but I’ll tell just this one story – maybe some foreshadowing of what was to come?!

As finals were approaching in May of 2008, my roommate, Ashley and I went to a bar for one last good time out and we  played darts.  Ashley and Joe both nailed the board and of course, my dart is way off to the right.  The two of them are cackling and I’m trying to figure out how to explain this.  Well…when I used to have too many “sodas”  at the bar, the double vision would return and thus the reason my dart almost took someone’s eye out.  So I explained it to the two of them and looked at me like I was crazy.

I haven’t heard him shuffling around the house in a while.  He hasn’t had a seizure downstairs has he?  I picture him passed out on the floor, or worse yet, he could have hit his head on the way down.  I find an excuse to go downstairs to check on him.  Was that a facial twitch?  Did he just slur that sentence?  Why doesn’t he remember that I told him that story yesterday?  It can’t be growing back, can it?  Is it genetic?  Should and will we be able to monitor our kids for it?  Is that a red line on his chest, could his shunt be malfunctioning?  Does he have his shunt information in his wallet?  What if he has a seizure while he is driving, what’s my plan of action to take control of the car?  Should he be driving by himself?

I am a survivor’s wife, and these are the thoughts that flash through my head on a daily basis.

I have never told him about the extent of my concern (though I suppose now he knows – hey, hi!).  Granted, I am a worrier by nature, but I have to imagine that most spouses deal with similar fears and thoughts.  When the fears come rushing in like a bullet train, I force myself to slow down and think back…

Chris and I met during our first year of law school in the fall of 2007.  I doubt that the well-dressed, Yankee-loving Italian guy thought he would end up at the altar with an Irish-freckled, Boston tomboy donning a Red Sox hat…but life is funny like that.  The lines between friendship and something more had just started blurring when Chris was diagnosed with his brain tumor that summer.

Another law school friend and myself went to visit Chris right after his first surgery.  We knew he was unable to fully communicate with us, so we weren’t expecting much other than just being able to see for ourselves that he was okay.  Throughout the previous year, Chris and I had a running joke about how someday I was going to make him a Build-A-Bear.  He basically told me that he would rip it up and flush it down the toilet if I ever did.   I figured this was the perfect time to make good on my promise, and I made him his very own bear.  When we walked into the room, he couldn’t say much of anything, but I watched his eyes catch the Build-a-Bear box, and a wild look of anger crossed his face.  I was never so happy to see someone so mad – it meant he was still in there somewhere.

Even though his stuffed animal anger brought me hope, things got worse before they got better.  On our way back to the hospital the next day, my friend and I received an anguished phone call from Chris’ sister.  “Something’s wrong with Chris and he’s having emergency surgery, you probably shouldn’t come.”  We turned around and had the most worried, silent drive home to Rhode Island.  He survived what we later found out was a life-threatening infection.  I spoke with his sister after the surgery and I can still hear what she said to me: “My brother and I had to rush to the hospital to say goodbye because we really thought we were losing our brother”.   Now, every time I watch Chris together with his siblings, breaking each other’s balls and laughing, or when I see him holding his nephew, I think back to his sister’s haunting statement, and it always brings a tear (albeit a happy one) to my eye.

The months after brought a few more visits.  Verbal communication was almost impossible, and the frustration as he tried to say something he was thinking was palpable.  I would tell him stories and although he couldn’t respond, I could tell he understood by his facial expressions.  He called me on my birthday that year and tried to say “Happy Birthday”.  Such a simple phrase, and he struggled for minutes.  I sobbed after I hung up because I was equal parts heartbroken for him and just honored that he would try so hard for me.  I resolved to wait for him, because I knew he would be back…and a few months and a miracle later, back he was.

So when the worry monsters attack, I try to take a big step back and remind myself that I am lucky that I am even in a position to worry about him and the future.  I am lucky he can respond to me.  That he can actually go to work and tie his own shoes.  A good friend’s sister was just diagnosed with an inoperable brain tumor.  I couldn’t stop crying for her.  For everything her family is going through and for the fact that we are so god damned lucky.  I’m not a religious person, but I have to believe there’s a greater purpose for all this – for why Chris pulled through miraculously.   So when I step back and reflect, I realize that maybe my worries are really just blessings in disguise. 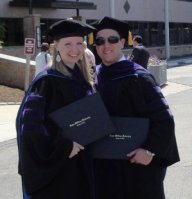 6 thoughts on “I Am The Luckiest”